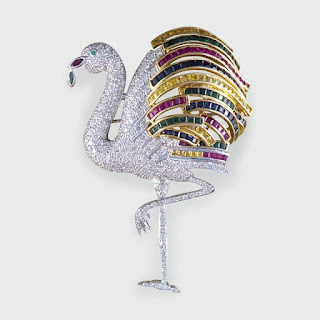 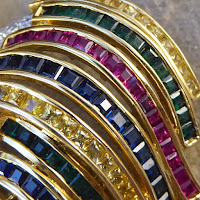 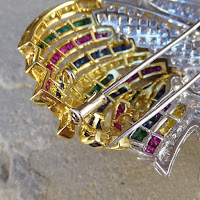 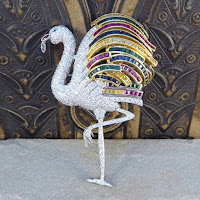 This stunning piece is a reproduction of Cartier's famous flamingo brooch. The original was a gift given to Wallis Simpson by her husband the Duke of Windsor. This reproduction piece is of fantastic quality and features approximately 3ct of diamonds across the birds' legs and body. With a combination of blue and yellow sapphires, emeralds and rubies for the feathers, the burst of colour is enticing!

Click here for more information on our brooch for sale 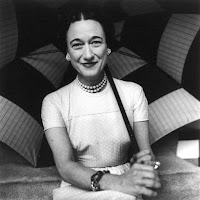 Wallis Simpson loved socializing, and it was at a party that she became acquainted with Edward, Prince of Wales in 1931. From there, the Prince and Wallis Simpson grew close, which led to outrage from his British family as Wallis was seen as a woman of loose morals, due to her several marriages and overly confident behaviour. She was also seen as a seductress who had tempted the heir to the throne away from his duties.

In January 1936, King George V (Edward's father) passed away, making Edward King of England.
Later that year, Edward renounced the throne to continue his relationship with Wallis Simpson, and they married in 1937.

The piece in question was commissioned in 1940 by the Duke of Windsor. The elegant bird was soon given to Wallis Simpson, and the Cartier archives reveal that the duchess reused gems from a necklace and four bracelets in her collection in order to have the flamingo made. The piece was eventually sold at a Sotheby's auction in 2010 for £1,721,250 against an estimate of £1.5m!

Posted by Wharfedale Antiques at 03:13 No comments:

This ornate Masonic Ball Fob can also be known as a Cross Fob or a Masonic Orb. It can appear initially to simply be a Gold sphere, however when unhinged, it opens into a cross-shaped Pendant. The original Freemason owner of this will have worn this to discreetly shown their membership into the brotherhood. They are still in production to this day, however most commonly date to the late 19th century.

Originally typically used as a fob for a pocket watch, in modern day they can also be used on a charm bracelet or worn on a chain as a Pendant. This design typifies the great craftsmanship shown in Masonic jewellery, with the arrangement of small hinges not being visible from the exterior.

When opened the cross shape is formed by six pyramids, each showing four Masonic symbols. There are several interpretations of the meaning behind the creation of these, one being  that when the fob is laid out, it shows the structure of a lodge room with the Master’s square at the right, the two pillars and the level of the Senior Warden on the centre left and the cross in the middle. The left segment then represents the first degree, the upper segment represents the second degree and the lower segment represents the third degree.

Masonic Jewellery was typically made from 9ct or 10ct Gold, this particular piece bears 9ct and Silver hallmarks on the underside. The varieties of symbols on the pyramid faces include the tools of stonemasons to represent moral values which are a key element of freemasonry.

For more details on our Masonic Ball for sale click here!

For further reading, here is an explanation of the cruciform arrangement of St. John’s Lodge Emblems contained in the golden Globe:

1st Row:  (to be read from West to East)
"The Conception of God"

3rd Square:
Cross and Cabletow:   The true and first perception of Him has come to us through Christ.


2nd Row:  (to be read from North to South)
"The Way From Darkness to Light"
(The moral evolution in virtue of the conception of God.)

1st Square:
Rough Ashlar:    The natural man who, being ignorant, has to learn by the spirit of God,
Tesselated pavement:  but is still His child, capable of development by the divine light that dwells within him.
Seven steps:   by patient perseverance in well doing, and thus ennobling himself
Trowel:  he purifies and refines his heart according to the will of the Great Architect.

2nd Square:
Cross and cabletow:  The real Teacher of the true way of life is the Master of Nazareth,

3rd Square:
Skull & crossbones:  who has shown by precept and example, that we can, whilst on earth here, separate the earthly from the heavenly,
Acacia:    and who has brought life
Perfect Ashlar:   and eternal existence to all.

Posted by Wharfedale Antiques at 03:25 No comments: